A young Australian tourist’s social media post has backfired after he uploaded a picture of himself drinking pool water – only to be rushed to hospital shortly time after.

Brisbane man Isaac Power was relaxing in a pool in Bali on holiday on Tuesday when he snapped an image of a statue holding a hose spraying water into its mouth.

Mr Power shared the photo of the pool prank on Bail Bogans’ Facebook page alongside another image of himself receiving treatment at a health clinic.

‘To yell [to] Dr Ari, he is still alive,’ Mr Power said in his message.

Hundreds of seasoned Bali travelers commented, some showing sympathy but others heckling Mr Power for his “rookie mistake” of drinking the water from his resort’s pool.

“OMG you drank that haha,” said a Victorian woman on the page, for Aussies on holiday in Bali.

“I guess we all go through it: that good old Bali belly, it’s definitely an experience, that’s for sure.”

“Must be a first rookie, drinking that Bali water,” said a Perth man.

A mother from Adelaide has said her son was ‘violently ill for days’ after drinking pool water in Bali. 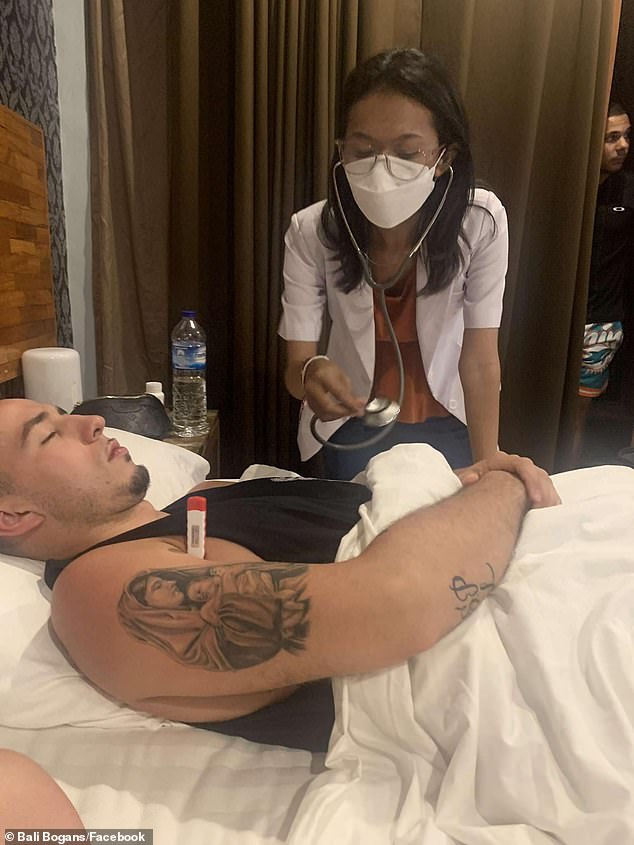 Isaac Power, a man from Brisbane, fell ill after posing for a photo while drinking the water sprayed in his hotel’s pool in Bali

“It was sad to watch.

“The doctor said bacteria from the pool had done it and a lot of people in our hotel had ear infections. A few days later our pool was green, the pump was not working properly.

Another Victorian man questioned whether Mr Power was a ‘newbie’ to Bali before offering advice.

“Never open your mouth to their water, even to brush your teeth, use bottled water,” said a young Australian miner.

‘All fun and games until you fuck yourself! Poor bastard,” said a woman from Perth.

Several reviewers have questioned whether it is worse to drink pool water or tap water in Bali.

“Pool waters are okay, aren’t they?” joked a Kiwi.

A Sydney man said it made no difference.

“All water is fire!”