Hyderabad: Prime Minister Narendra Modi said India’s freedom struggle was inspired by the spirit of equality, but not to usurp power. The struggle for freedom was prompted by the preaching of the saints, who fought for the equality of all sections, he said after unveiling the 216ft Statue of Equality – Sri Ramanuja in Muchintal here Saturday.

“On the auspicious occasion of Vasant Sri Ramanuja Panchami, I pray to Goddess Saraswathi that the knowledge of Sri Ramanuja will lead across the world,” Prime Minister Modi said.

This towering statue of Sri Ramanuja will inspire generations to come as Sri Ramanuja’s life clearly shows that there was no conflict between reforms and traditions, he said.

In line with the teachings of Sri Ramanuja, Modi said that central government policies and programs ensure the welfare and development of all sections without any discrimination.

The Prime Minister said Telugu culture and traditions, which were patronized by the rulers of Kakatiya, Satavahana and Vijayanagara, were acclaimed around the world. UNESCO granted heritage site recognition to the temple of Ramappa and UNWTO declared Pochampally as the world’s best tourist village, he said. 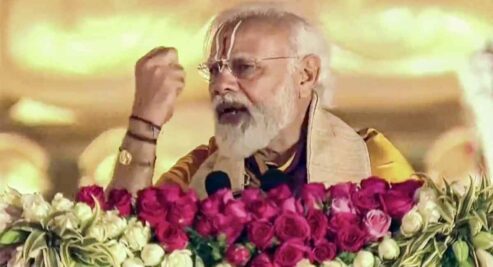 Previously, the Prime Minister participated in Visvaksena Ishti Purnahuti. He also visited 108 Divya Deshas, ​​which are replicas of 108 temples across the country.

Sri Tridandi Chinna Jeeyar Swamy said the Prime Minister has brought the country and Hindus to life with pride through his vision and work. “He is the right person to unveil the Statue of Equality,” Chinna Jeeyar said.

Union Tourism Minister G Kishan Reddy said the Statue of Equality would put Hyderabad on the world tourist map. The central government will ensure that many people, especially Hindus from all over the world, visit this place, he said.

You can now get handpicked stories from Telangana today to Telegram everyday. Click the link to subscribe.